This is one of a series of blog posts about my round-the-world trip in 2012, all collected under the #rtw2012 label. You may wish to read the first couple of background posts for context.

After a great few days in Istanbul, I flew on to Israel to hang out with my family. That was a lot of fun, as always, and I might blog about it later. But after that, I went to Moscow. Russia had long been on my “top 5 places to visit” list, so I was excited to swing by for the first time.

Landing in Moscow, it immediately felt unwelcome. This feeling would permeate the entire city, which is kind of bizarre. There is very little English signage, even at the standard international airport spots.

Thankfully, I had amazing hosts in Moscow, Anna and her husband Dima. They made my visit to the city so much better. And the city itself has a ton to offer. More on both below. But my initial impression was “whoa! This is going to be interesting.” A uniquely “visitors not welcome here” feeling.

Also worth noting before I get into details: Moscow was the first city of the trip for which I still have all my pictures, not just a few low-resolution captures from Foursquare. To find out how / why I lost many pictures, see rtw2012 – Photography. Or if you want to just see pictures, here’s the Facebook album.

From the airport I took the subway, for the first of many times, to meet my host Anna. I had to change lines once and it was in the middle of rush hour. It was crowded, everybody moving fast. I love that rush, especially in a new city where I’ve never been before.

There are no English signs in the subway, almost at all. So I had to improve my Russian reading, or at least trans-literation, skills, on the fly. It’s actually not that hard, thankfully.

One of the first signs I saw coming out of the metro was for a Tiesto show, and that was followed closely by an Armin van Buuren show. I was curious to hear some local DJ talent, as well. It later turned out they were pretty good.

I met up with Anna, and we walked to her apartment. She very graciously let me stay there while I was in Moscow, and it’s a beautiful apartment in a great location. Thanks for the connection, T.

After showering and changing, we went out to dinner. The open-air restaurant / bar / lounge is part of a little complex, a few places, in a former candy factory, I think? Some kind of manufacturing plant, anyways, which makes for a cool vibe. The weather was perfect, and the crowd was fascinating to watch. The thing at this place is that you pick your (meat), and they grill it for you, with various sides, Russian-style. It was delicious.

From there we went to Strelka, a well-known bar not far away. It was a good bar with great music, setting the theme for Moscow.

The next day I walked around many of Moscow’s central, historical buildings. Walking past the Lubyanka was a thrill, having read so many books that mention it directly or in passing.

Walking around Red Square is just impressive. I’d read so much about it, but seeing it in person is something else. It’s huge and foreboding, like it’s designed to intimidate. There were many people out and about in the perfect afternoon weather. Everything seemed spotlessly clean, unlike some of the side streets and alleys — par for the course in a large town.

St. Basil’s cathedral, the famous dome seen in many pictures, was cool. There was (luckily) not a long line to see Lenin’s mausoleum, and I also got an unexpected treat from Formula 1 visiting town for a day or two, drawing a large crowd for a demo race.

I stopped by the GUM mall on a friend’s recommendation. I didn’t do a lot of shopping on this trip in general, but this mall was very cool. It reminded me of Milano’s covered shopping arcades.

It was fun to walk around the classic main streets of Moscow, such as Tverskaya and Petrovka. I checked out the Bolshoi theatre, but did not go to a show. From there I made my way to Pushkin’s square, and back home along the “bulvar” (ring road).

The Kremlin itself was fascinating. It took a while to get tickets, but walking around once inside was cool. i didn’t do all my research, so I didn’t realize it was actually numerous buildings, churches, and other things to check out.

The gardens around Red Square are very nice, too. Some people were dancing, others just walking around. They are really clean and well-kept, and everything was blossoming. (This is in July…)

I also went to the Tretyakov Gallery, and it was good, but nothing compared to the Winter Palace / Hermitage museum I visited in St. Petersburg the next week (subject of the next blog post in this series.)

Anna and I grabbed dinner at a Soviet “traditional style” restaurant near the Lubyanka, and it was delicious. I really liked the Russian country dark bread, especially fresh and hot. Overall, the food is fairly simple, earthy, and much of it (sadly) is fried. As in several other countries, McDonald’s was a popular destination for many locals, although I did not swing by. 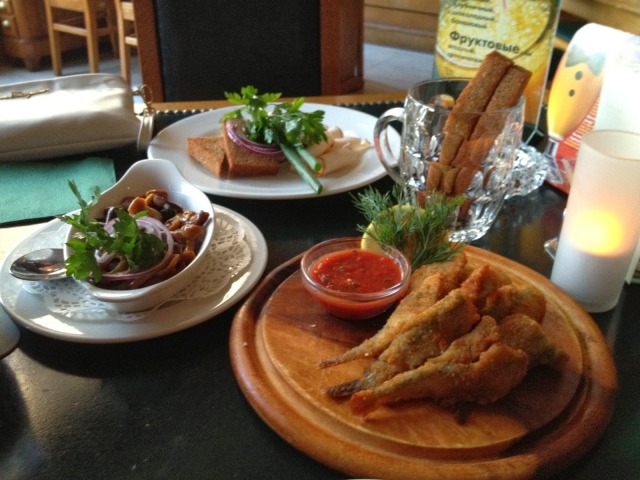 Moscow nightlife deserves a chapter of its own, really. I loved the clubbing scene here. A lot of people complain about “feis kontrol” (pronounced “face control”), perhaps rightfully, but the system is pretty easy to work, and similar to other picky parts of the world. It’s easier as a foreigner, actually.

No one complains about the “local” women. After a night or two, when I saw any non-blonde woman, I started to think she was wearing a wig just to stand out.

I’m not going to elaborate on the Moscow nightclubs here, but if you see me in person, ask for stories. They’re solid. Krysha Myra, Fabrique, Propaganda, Night Flight, they’re legendary places for a reason. 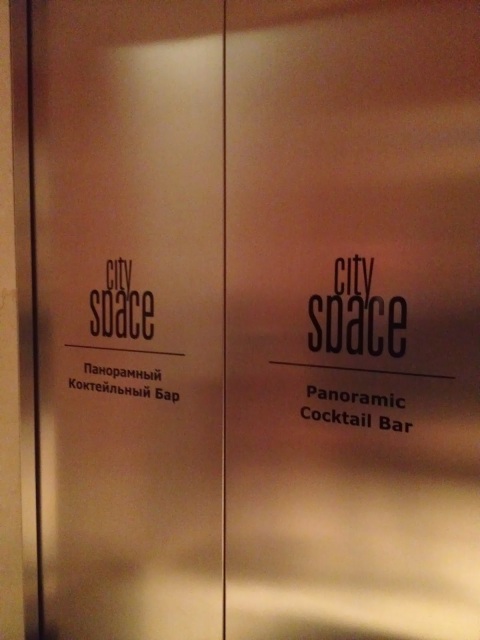 I was pleasantly surprised by the quality and selection of craft cocktails in Moscow. There was plenty of vodka everywhere, obviously, but also a variety of other interesting options. City Space‘s “molecular mixology” stood out, and their “Nano Maria” was amazing.

One final attraction worth visiting in Moscow is a tiny museum, but a fascinating one, is the official Gulag History museum. You have to go through a small archway on the fancy Tverskaya street, past a fake barbed wire fence and guard towers, made to look like the entrance to a Gulag camp. It’s really cool inside, featuring many photographs in all their versions, “official” and real, edited and otherwise, chronicling media manipulation, and of course the gulags themselves. Highly recommended.

Soon enough, it was time for me to board the classic “Red Arrow” train on an overnight ride to St. Petersburg. Moscow was a blast. Even though it initially felt unwelcoming, I can see myself coming back.