San Francisco was the first stop on my trip that’s significantly far from home on the east coast. Besides breaking up the long flight to the next destination (Tokyo, an upcoming blog post you don’t want to miss…), I also have a number of great friends in San Francisco, folks whose company I very much enjoy.

I had been here numerous times in the past, so I didn’t do a lot of the first-time-tourist activities.

I arrived on a gorgeous early afternoon in May. The flight was uneventful, except for the checkin process. The agent did a double-take when she saw what type of ticket I was on, and how many stops were on the same itinerary. That led to a good conversation, the first of many such exchanges. Yes, I’m really going around the world. No, it’s not a joke, nor a test of your system or service, etc.

I took BART to the Mission, walked through that neighborhood to the Noe Valley area, which was my home in San Francisco. A huge thank you to Leah and Stephen for hosting me, being gracious friends, and showing me a great time. On the way there I passed a number of interesting shops, including this bakery… 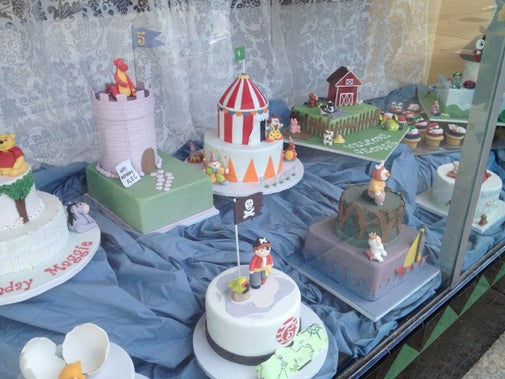 This was my first time exploring the Noe Valley. It’s a fun neighborhood, filled with good local shops, restaurants, and bars. It’s also very hilly, which made for good challenging runs.

We went to the “Off the Grid” food truck festival, a fun experience with plenty of good food options, accompanied by a very nice San Francisco sunset on the bay.

The same evening we hit up “Twin Peaks” for a nice view of the city. I had been to this observation point before, but not at night. It was gorgeous. 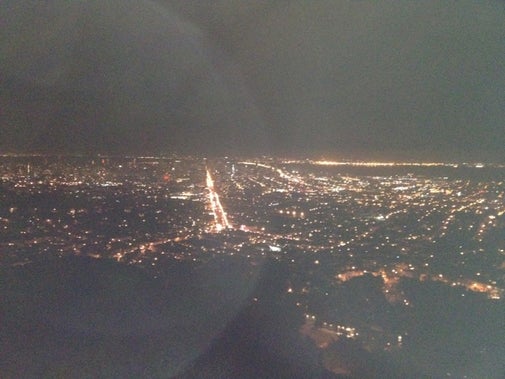 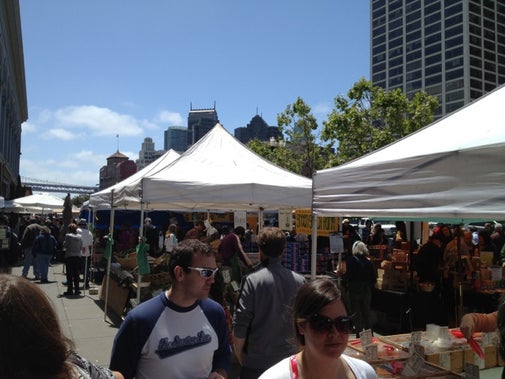 In every stop on my trip, I tried to play pickup soccer, basketball, or both, as a way to meet people. This little park in North Beach had a lively 5v5 game which provided some extra exercise. 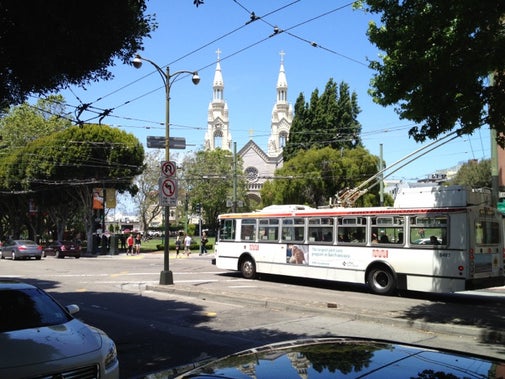 Later that day I met up with Kyle and his Chateau Greenwich crew, who were excellent hosts. Steve, Kathleen, Jon, Taylor, Alfredo, Erin, and everyone else provided gracious hosting, drinking company, and entertainment.
We hit up the Brick Yard, their standard neighborhood bar, for the Celtics vs. 76ers playoff game 7, some late-night Indian food, and even later live music. I still don’t know where my hat from that night went.
I visited Tartine bakery a couple of times while in SF. It has some of the best baked goods I’ve ever had, and a visit is totally recommended. Just make sure to come off-hours, because during breakfast, lunch, and afterwork, the line is very long.
Stephen and I hit up a random street carnival in The Mission, on our way to Zeitgeist, an excellent beer bar. The carnival certainly provided some entertaining people-watching. 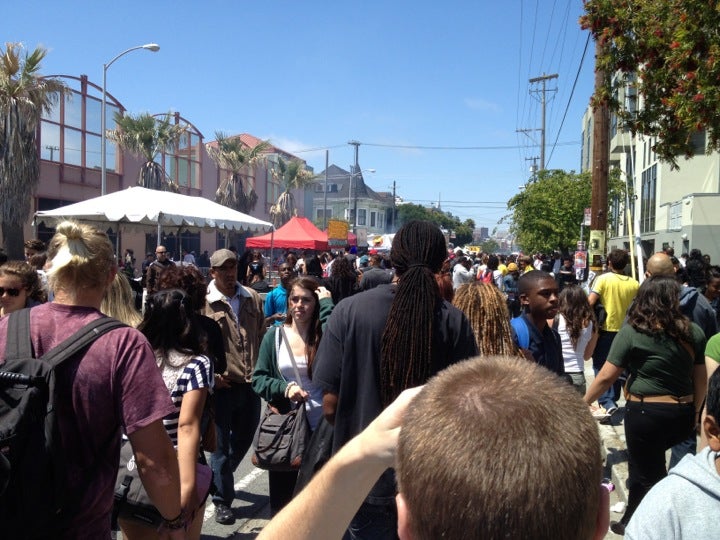 Brunches at Stacks and Fresca (separate days) with a few friends, including long-ago colleague Ryann,  and former Boston-area tech buddy Luis (and his wife Clarissa), were both delicious.
I did a couple of long walks around town, to the tune of 10-15km each. SF is such a fun city for walking, with gorgeous views around every corner.
Beretta was a great place to meet my friend Matt, who’s always cool. We had some snacks, and the place was surprisingly full for 3:15pm, an off-hour typically. 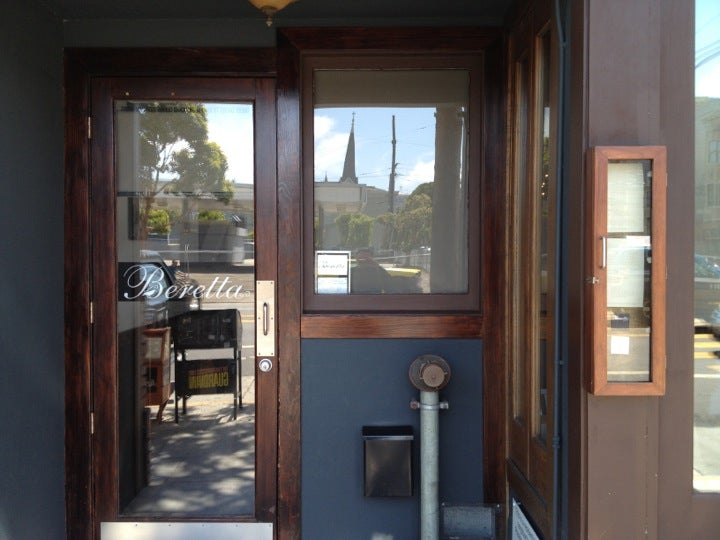 I made sure to hit Four Barrel, Blue Bottle, and Ritual Roasters (twice) while in SF. Excellent coffee to be sure. It’s often matched by an equivalent-level attitude, but since I just ordered the pourovers and waited patiently, I incurred no wrath.
Stephen and Leah took me to two excellent dinners, one at Range and one at Firefly. Both were delicious, with great service, great atmosphere, and very good drinks as well. SF is a solid foodie town. I also had a lucky dinner at Manresa, but that’s a subject for another blog post.
Jean (another friend who used to work with me at HubSpot) and Sabrina live very close nearby, so we met up with them as well. Jean’s working on a very interesting new company called Quantopian, which has since launched its first public product. You should try it out, it’s a lot of fun and very interesting.
At Firefly, we went on fried chicken night, and it was excellent. But the “peaches and creme” sorbet dessert was truly exceptional.
I spent one afternoon playing some Ultimate and reading up on Tokyo, my next destination, at Dolores Park. Beautiful views, and fun people watching. 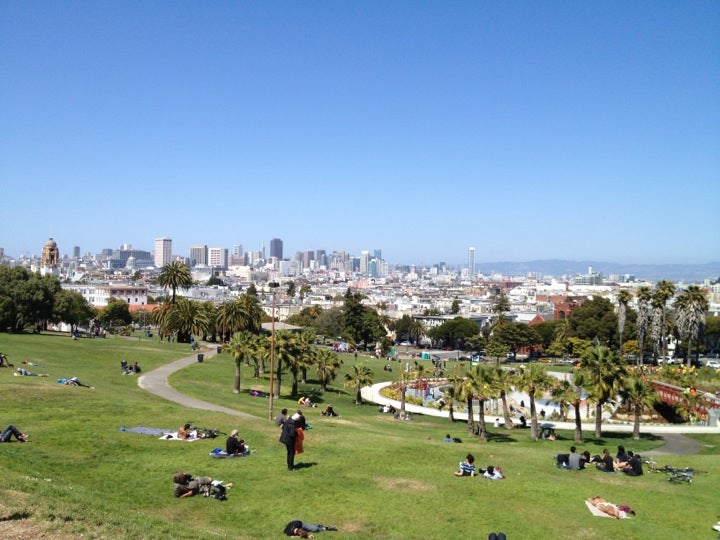 Another lunch highlight was a chicken tikka masala burrito from the Curry Up Now Indian street food truck downtown.
I’m probably forgetting some items and people, but overall I had a blast in San Francisco. It was nice to start my trip in a familiar city where everyone speaks English. That would change at the next stop, Tokyo…